BEWILDERNESS OF FOREST MANAGEMENT UNIT DEVELOPMENT AFTER THE ENFORCEMENT OF LAW NO. 23/2014

Indonesian government, through (then Ministry of Forestry), now Ministry of Environment and Forestry, has released Development Strategic Plan for Forest Management Unit (Rencana Strategis Pembangunan Kesatuan Pengelolaan Hutan (KPH)) with Forestry Ministerial Regulation (Permenhut) 51/Menhut-II/2010 on FMU zonation and the operation of FMUs throughout Indonesia. The model FMUs zonation was intended to accelerate the operation of FMUs all over Indonesia. Up to December 2013, 120 out of 530 units of total FMU have been appointed as model FMUs.

FMU, as a mandate of Indonesian law No. 41/1999 on Forestry, was expected to strengthen the institution and implementation of forest management on site-level. The role of FMU, as the smallest unit of forest development, has become significant in countering the unsettling forest degradation and deforestation. From management point of view, the lack of forest management unit in site-level is suspected to be one of the main causes that numerous forestry projects have failed; from marginal land rehabilitation to forest protection from encroachment, illegal logging, and tenurial conflict.

FMU will replace bureaucrats’ dominant role from previously forest administrator to forest manager. FMU will also improve the accountability in forest management (Kartodihardjo & Suwarno, 2014). Moreover, FMU is expected to be transitional policy to decentralization and devolution of forest management in Indonesia.

In fact, however, the development and operation of FMU to this date still have to face challenges. New challenges emerged as a new regulation on regional government delegation of authority came into effect. Indonesian law No. 32/2004 was replaced by No. 23/2014, which consequently reconstructed the authority, institutional structure, and forest management zonation by regional authorities which have been built in municipal (town/city, kabupaten/kota) level.

As opposed to law No. 32/20042, the new regulation stated that the authority for forest management has been returned to provincial and central authorities, resulting in various responses from regional officials. Such effect is highly related to the regions (municipality and province) propensity to adapt to changes after the new regulations comes into effect. The shifts in relation and authority between provincial and municipal authorities in forest resource management have become one of the critical points to be addressed quickly and wisely. Otherwise, they may hinder the acceleration of development of FMU in Indonesia which have been operating for the last 7 years.

With law No. 23/2014 came to effect, the first implication to address is the regulation renewal, as the derivative implementations of Law No. 32/2004, such as Government Ordinance/Regulation No. 38/2007 and Ministerial Regulation No. 61/2010 as legal foundations for the development and operation of FMU cannot be referred to anymore (Suwarno et al. 2016). Those regulations should be immediately replaced by new government ordinance and ministerial regulation referring to Law No. 23/2014. The shift in authority consequently made the protected-FMU (kesatuan pengelolaan hutan lindung (KPHL)) and production-FMU (kesatuan pengelolaan hutan produksi (KPHL)) initiative and formation by municipal officials put to a halt (Suwarno et al. 2016) as in production-FMU in Riau Province. Whereas the fundamental shift is on workflow/coordination system between government institutions which involves structure, authority, relation, and also capability of each party. 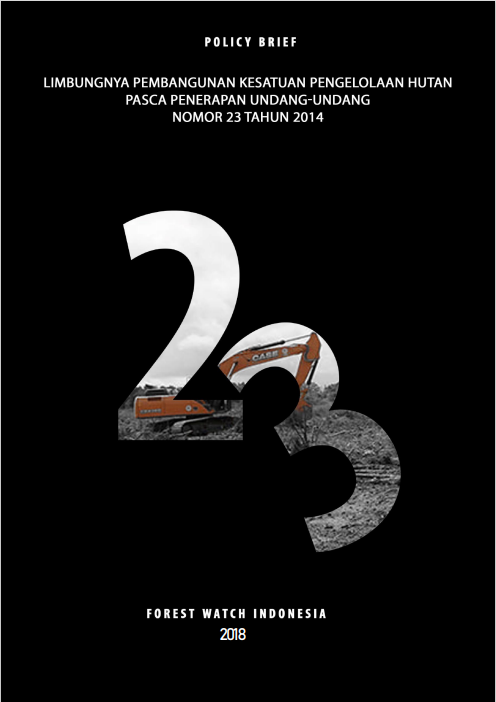 BEWILDERNESS OF FOREST MANAGEMENT UNIT DEVELOPMENT AFTER THE ENFORCEMENT OF LAW NO. 23/2014
Download Now!158 Downloads
Thank you for your vote!
Post rating: 0 from 5 (according 0 votes)
Tags: #SudahCukup

The Polemic of Indonesian Deforestation

For whom the infrastructure in Papua ...