Why the Palm Oil Bill Discussion Must Be Stopped Immediately

This policy paper contains seven reasons why the DPR and the government should immediately stop discussing the Palm Oil Bill.

In January 2017, the government and the Indonesian Parliament agreed that the Palm Oil Bill should be one of the priority bills completed in 2017. The main reason put forward by the advocates for this bill is to protect the palm oil industry from foreign intervention1. Besides, three other reasons presented by Commission IV DPR RI who initiated this Palm Oil Bill are as follows: 1) In the socio-economic field, to ensure the welfare of farmers, 2) Increase the professionalism of all sectors in palm oil, from upstream to downstream; 3) In the field of law, to provide a solution to the chaotic licensing process, thus providing a specific solution for illegal plantations (plantations that are in forest areas or operating without HGU)2.

This policy paper presents the Palm Oil Bill article’s analysis of, stated in the draft of the Palm Oil Bill, downloaded from the DPR website3. The results of the analysis show that this bill instead of providing solution for the problems mentioned, it has the potential of causing new troubles, including exacerbating overlap and legal confusion. Below are seven arguments on why the discussions Palm Oil Bill must be stopped immediately.

Protecting the ‘national interest’ is the main argument echoed by groups of supporters of the Palm Oil Bill4. The facts show that the only interests intended to be protected by this bill are the interests of the richest few in this country, namely corporations in the palm oil industry. Currently, the largest shareholder of palm oil in Indonesia is Malaysia, followed by the United States, United Kingdom, Singapore, Bermuda, Brazil, Canada, France, and the Netherlands. The largest bondholders are the United States, Canada, Switzerland, the United Kingdom, France, Denmark, Germany, Japan, and Italy. Meanwhile, the biggest lenders in this industry are Malaysia, Indonesia, the UK, United States, Singapore, Japan, and Germany. Based on these simple facts, it is obvious that if this bill passes into law, those benefitted the most will be the national interests of Malaysia, the United States, Britain, Singapore, and other countries controlling the palm capital5.

Further facts reinforce these allegations. The five largest private palm oil plantation owners in Indonesia are Sinar Mas Group, Salim Group, Jardine Matheson Group, Wilmar Group, and Surya Dumai Group. These companies also hold the vastest land bank or land supply in Indonesia. This means that if the Palm Oil Bill has become law, Indonesia is being made a “bancakan” of other countries, because according to this bill, the Indonesian government must finance or facilitate all stages of palm oil business owned by corporations. Thus, instead of the interests of the entire Indonesian nation, the Palm Oil Bill is more of a corporate effort to extract state finances by demanding various financial or financing facilities from the state, ranging from nurseries, providing capital, providing land, transportation, to providing water for palm oil plantations6.

expansion, such as environmental damage and social conflict. As an illustration, losses due to the state to tackle fires amounting to 720 billion rupiahs. This count does not include the incalculable losses due to 24 people who died and 600 thousand people suffering from ARI, plus 60 million people who were hurt by smoke (BNPB, 2015). Amid the government’s efforts to improve land and palm oil governance through forests moratorium policy, peatlands, and the release of forest areas for palm oil and to strengthening Indonesia’s standards for sustainable palm oil (ISPO) production, this bill has the potential to undermine all these efforts. 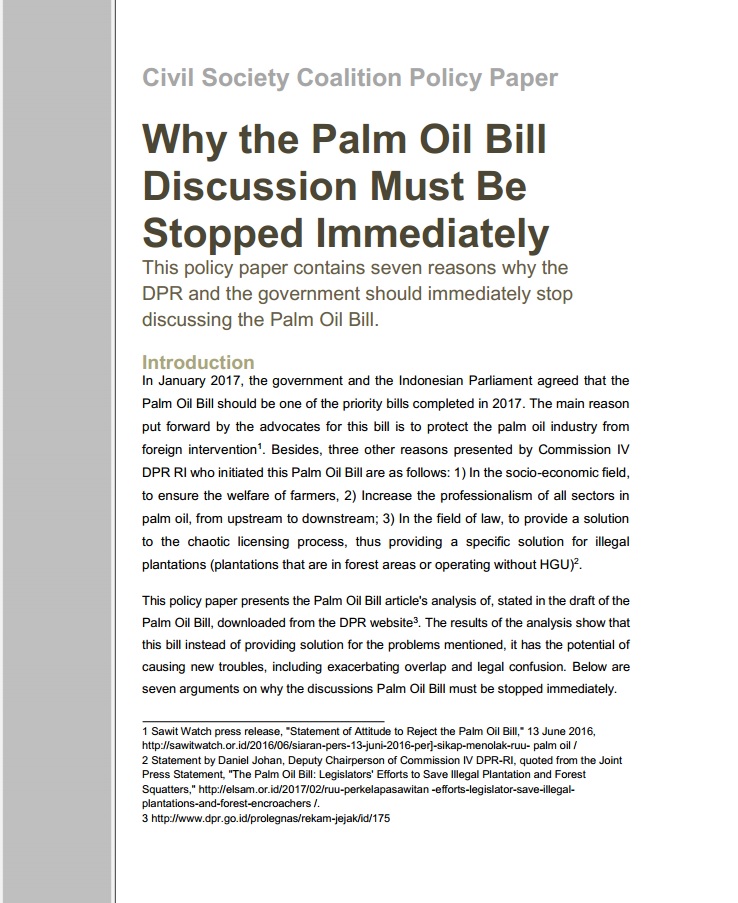 Policy Paper Why the Palm Oil Bill Discussion Must Be Stopped Immediatel
Download Now!185 Downloads
Thank you for your vote!
Post rating: 4.8 from 5 (according 1 vote)
Tags: #SudahCukup