The President of the Republic of Indonesia, Joko  Widodo, admitted that Indonesia is the sixth largest global carbon emitter (Kompas, 2015). WRI’s 2012 data shows that 1.98 billion tons CO2 is emitted annually. The forestry sector is the greatest contributor of carbon emitted from deforestation and forest degradation (UNDP, 2007 ). In 2011, the Government of Indonesia issued Presidential Regulation No. 61/2011 on National Action Plan for Greenhouse Gas (GHG) Emission Reduction 2010-2020. Indonesia also ratified the Paris Agreement through Law No. 16 of 2016 on Ratification of Paris Agreement to the United Nations Framework Convention on Climate Change. Indonesia is committed  to reducing emissions by 29% on its own efforts and as much as 41% with foreign aid by 2030 under business-as-usual scenario, through sectors including forestry and agriculture.

FWI’s most recent study shows that, though the study was done only in three provinces, deforestation rates are still high for 2013-2016 with reached 240 thousand hectares/year, which was an increase from the 2009-2013 figure of 146 thousand hectares/year (FWI, 2014). When combined, North Sumatera, East Kalimantan and North Maluku have lost 718 thousand hectares natural forest in the last three years. Other analysis has found that 72% of the deforestation occurring in these three provinces is located in areas under management permits. Activities in forest concessions (Hak Pengusahaan Hutan – HPH), industrial plantation forest (Hutan Tanaman Industri – HTI), oil palm plantations, and mining concessions are direct causes of deforestation.

These deforestation facts demand for the Government of Indonesia side with communities living in and around forests. This includes realizing the Government’s commitment in reducing emissions, protecting the environment, preventing disasters, and conserving natural resources. Facts show that 50% of all land in North Sumatera, East Kalimantan and North Maluku is controlled by concession holders. Only 4% of the land is controlled and managed by communities through social forestry or customary forests. In addition, facts show that forest  degradation and deforestation in these provinces have led to natural disasters: flood, landslides, droughts, and loss of wildlife habitats. 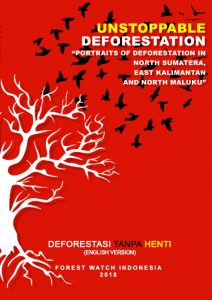 “COMPOSING THE STANZA OF NATIONAL ANTHEM” ...

The Tycoon of Papua Forest