Bogor, 16 February 2016. The 3 year-long process to push forward the freedom of information in forestry sector has eventually come to a turning point, which was marked with the handover of forest management document from the Ministry of Environment & Forestry (MEF) to FWI on Monday, 15 February 2016, at Manggala Wanabakti Building, Ministry of Environment and Forestry.

Freedom of information in forest management is eventually endorsed by the MEF. The Secretary of Directorate General of Sustainable Production Forest Management (PHPL), Sakti Hadengganan Harahap, in a symbolic ceremony, handed over the RKUPHHK, RKTUPHHK, RPPBI, and IPK documents to the Deputy Director of FWI, Soelthon Gussetya Nanggara. 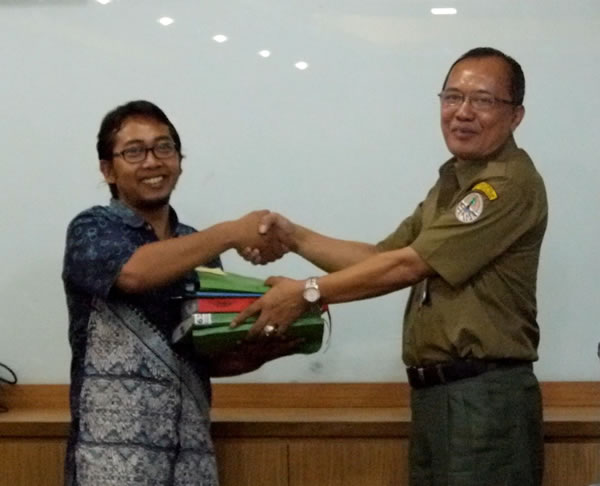 “Coming to a point where the MEF is willing to disclose its information is not an easy task. The long process has been started since 2013 with a series of proceedings at the Central Information Commission (KIP) and State Administrative Court (PTUN). The entire process culminated when MEF’s appeal was rejected and the requested documents were not given until the deadline has passed. It was at that time that we decided to gather a wider public support by making a petition on change.org. Thanks to the public support, now the ministry has started to correct itself by opening and handing over the documents relating to forest management in Indonesia,” said Linda Rosalina, FWI Campaigner. (Link to the petition: https://www.change.org/p/kementerian-lingkungan-hidup-dan-kehutanan-menteri-lingkungan-hidup-dan-kehutanan-jokowi-sitinurbayalhk-patuhi-putusan-ptun-bukainformasi-publik-di-sektor-kehutanan)

The government, including we, the MEF, are highly concerned with public freedom of information. So if it is truly considered as a public document, we will surely share it with the public. Of course we hope that the public together with government can obtain the same information. Public can also pay more attention to ensure the development process go well,” stated Novrizal, the Head of PR Bureau, MEF, during the document handover ceremony (15/02/16).

An open public document might increase public participation, both those who reside near as well as far from the forest, to participate in managing and oversee the forest. “This is a triumph for everyone who is concerned with the condition of Indonesian forests. At this moment, we need to bear in mind that the MEF has been committed to be more open. We definitely fully support and appreciate that step, and we will keep safeguarding the implementation of freedom of information in forestry sector,” said the Deputy Director of FWI, Soelthon Nanggara, during the press release.